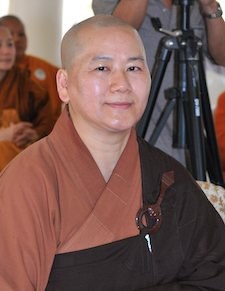 Bhiksuni Ming Yu grew up in a town known for its scenic beauty of hills and a lovely lake. She enjoyed her girlhood there very much and when young took refuge in the Triple Gem with the guidance of her grandmother. When it came time for high school, she and her family moved to Taipei City and there she completed studies. She earned her B.A. at Ming Chuang College’s Faculty of Business and Commerce, well-known for graduating successful business people.

After college, she worked in a company specializing in precious metals trading. However, another seed was planted in her heart. During her college years she participated in many Dharma activities and also took Refuge under Venerable Zhi Yu of Seeland Monastery. In 1989, when the Chinese Young Buddhist Association was forming she became a founding member and for 16 years thereafter served as its Office Manager bringing Dharma to the general public.

She was awarded the R.O.C. (Taiwan) Ministry of Interior’s 1998 National Award for Best NGO Staff and the Outstanding Woman in Buddhism Award 2010. Bhiksuni Ming Yu was ordained in 2006 in New York, USA by Venerable Miao Feng and in late 2006 took Bhiksuni and Bodhisattva Precepts with Venerable Jie De.

In 2009, Bhiksuni Ming Yu was elected as President of the Taipei Bodhi Buddhist Society and in the same year was given the Secretary General post of the Chinese Young Buddhist Association (CYBA).