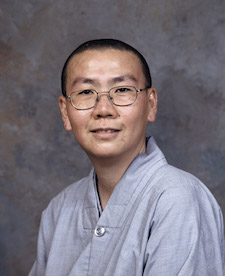 Born and raised in Singapore, Bhiksuni Dr. Shi Zhiru first became attracted to Buddhism when she was completing high school. At that time, her grandmother passed away. While chanting during the funeral, she felt an urgent impulse to understand the Buddhist worldview of life and death.

She began to frequent Buddhist temples and centers to practice ritual recitation of Buddhist sutras and explore Buddhist teachings. She became one of the pioneers to set up the Mahaprajna Buddhist Society where she studied and taught Buddhism for 4-5 years.

Upon receiving her B.A. honors degree in English Literature from the National University of Singapore, she immediately took up the robes at a local Buddhist center, the Mahaprajna Buddhist Society. Shortly after, she went to Taiwan to receive the full ordination precepts and undertake monastic training.

Beginning August 2000, she has been teaching at Pomona College, a liberal arts undergraduate university, in Southern California, where she is now an Associate Professor of Religious Studies, specializing in teaching Buddhism and Chinese religions.

She published a book on the formation of the Dizang (Ksitigarbha) cult in medieval China, and is currently writing a manuscript on art, charity, and Buddhist authority in contemporary Taiwan. Her research interests include Mahayana Buddhist devotion, Buddhist images and ritual practices, and contemporary Taiwanese Buddhism. Most of her research and publications highlight an interdisciplinary approach that combines field research with the study of Buddhist history, texts and art in order to analyze religion as “lived” traditions. In her previous publications, she has regularly integrated art-historical and archeological findings into her research. More recently, she has also begun to integrate ethnographic fieldwork.

Her awards are numerous, including: the Outstanding Woman in Buddhism Award 2010, Graves Award for Excellence in Teaching (West Coast North American Liberal Arts Competition), The University of Arizona’s Dean’s Fellow Award, and the China Times Young Scholars Award. She has been a Senior Fellow at the Harvard University Center for the Study of World Religions and is currently completing her book manuscript on Taiwanese Buddhism as a visiting senior research fellow at the Asia Research Institute in Singapore.