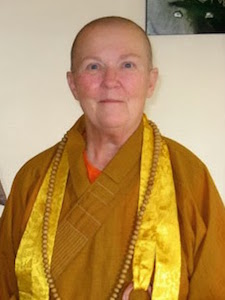 Ordained in 1976, the Venerable is the United States of America’s first Bhiksuni. Her teacher was the Vietnamese Bhiksu Dr. Thich Thien-An. Together they established the International Buddhist Meditation Center, Chua Vietnam, the first Vietnamese US temple and the University of Oriental Studies.

As Abbess of the International Buddhist Meditation Center, for the past ten years Bhiksuni Dr. Karuna Dharma has been writing to prisoners around the U.S. She explains: “About 80 of them are studying Buddhism with me. Another 500 of them receive the Monthly Guide every month. So I spend a lot of my time in front of a computer. My staff has taken on a lot of my duties at the Center, leaving me time to do my prison work. Besides ordaining people, I believe my prison work is the most valuable work I do. I rarely visit the prisons, however. Most of my work with prisoners is through writing to them.” It is very beautiful work and skillful use of the older years in life.