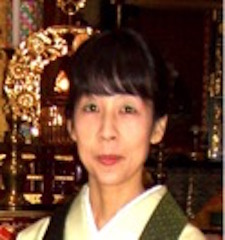 Mrs. Sato is bringing up 5 children in a small temple in the mountains of her hometown. The Japanese are said to be materialistic and leading an affluent life but people become mentally ill and commit suicide. She sometimes worries and suffers in her home life just like common people. So, she seeks to create the opportunity for people who get wounded and who worry to meet Buddhism.

For this purpose, Mrs. Sato has painted, created music, and written books. Her paintings, one woman shows, express the benevolent spirit of Buddhism.

A recent exhibit was for the Olympic Games in August 2008 at the Olympic Museum in Xiamen city, China. A Chinese person came to Japan in 2003 and sympathized with the benevolence expressed in her art work and five years later invited her to show her work in China at the Olympic Museum. So, now in her hometown she is preparing facilities for introducing the cultures of Asia.

Mrs. Sato published a music CD (in 2008) and a small book (in 2007) and is now writing a new book. She conveys the content of Buddhism without using any difficult Buddhist words.

A peaceful spirit of Buddhism flows in the cultures of Asian countries. Mrs. Sato hopes the flow becomes bigger and results in the disappearance of wars in all regions of the world. This is possible as all things in the world are related and changing each other. She notes that “putting the ego unlimitedly close to zero, and living supported by a peaceful mind with each other” will be the important compass for the Earth in the 21st century.